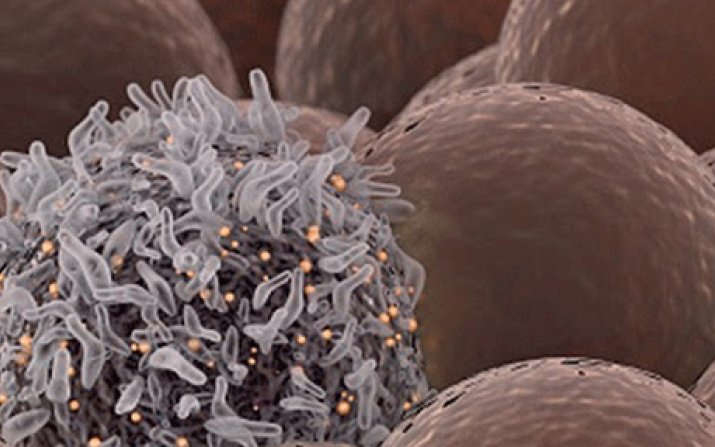 Case Western Reserve University researchers and partners, including a collaborator at Cleveland Clinic, are pushing the boundaries of how “smart” diagnostic-imaging machines identify cancers—and uncovering clues outside the tumor to tell whether a patient will respond well to chemotherapy.

The recent findings in breast and lung cancer research build off work pioneered by biomedical engineering professor Anant Madabhushi, founder of the Center for Computational Imaging and Personalized Diagnostics. He is senior author on a pair of recent journal publications and joined by scientists from the Case School of Engineering, Cleveland Clinic and New York University Langone Medical Center.

“And it is further evidence that information gleaned by computational interrogation of the region outside the tumors on MRI (magnetic resonance images) and CAT (computed tomography) scans is extremely valuable and can predict response and benefit of chemotherapy in lung and breast cancer patients,” said Madabhushi, the F. Alex Nason Professor II of Biomedical Engineering at the Case School of Engineering.

Madabhushi founded the center in 2012 and has more than 50 collaborators working on related projects. The lab has become a global leader in the detection, diagnosis and characterization of various cancers and other diseases by meshing medical imaging, machine learning and artificial intelligence.

Hope for HER2 breast cancer

The most recent research—published April 19 in JAMA Network Open—focuses on markers on tissue outside a breast tumor that can indicate whether a patient will respond to targeted chemotherapy.

Biomedical Engineering doctoral researcher Nathaniel Braman and medical school faculty member Vinay Varadan led a team of collaborators who reported discovery of a previously hidden “signature” associated with one type of breast cancer, known as HER2-positive (or simply HER2). It comprises about 20 percent of all cases and receives a special targeted treatment strategy.

The researchers have been able to classify the patients with HER2 breast cancer into molecular subtypes—corresponding to those who will likely respond to targeted chemotherapy and those who won’t—simply by analyzing an initial tissue sample.

The work “provides insights into the ability of radiomic analyses to capture clinically significant tumor biology,” explained Varadan, a co-senior author on the study with Madabhushi. It “justifies additional studies to assess the clinical utility of such noninvasive approaches to guide therapeutic strategies in this disease.”

The markers are not found on images made from tissue slides, but outside the tumor itself. They cannot be seen by the human eye, but are revealed by a process known as radiomics, which extracts relevant data from medical images like MRIs.

“Right now, these patients receive ‘one-size-fits-all’ treatment despite being quite diverse,” Braman said. “What we’re trying to do here is identify before treatment which patients will actually benefit from specific therapies. This could give doctors and patients information they did not have before.”

Putting the idea into use is probably years away, following clinical trials and then the big step of someday “getting doctors to be able to trust and use it,” Braman said.

To that end, the researchers wrote that they explored the overlap between their imaging signature and information from the tissue slides and genetics that doctors consider important in treatment decisions.

Radiomics of region outside lung nodule predicts benefit of chemotherapy

The other study, published in March, also evaluates whether computer-extracted image patterns (or radiomics) outside a tumor can indicate whether a lung cancer patient will respond to targeted chemotherapy.

“The problem at the start is that only one in four lung cancer patients will respond favorably to chemotherapy, but virtually everyone gets that treatment,” said biomedical engineering doctoral researcher Mohammadhadi Khorrami, one of the leaders of the research. “But all of the previous research has been limited to inside the tumor.”

In this case, the researchers examined image data from 125 Cleveland Clinic patients diagnosed with non-small cell lung cancer (NSCLC). All had previously received targeted chemotherapy, but only about half had responded to the difficult treatment.

Using the information gleaned from those patients’ data, researchers trained their technology to distinguish between image data of patients who had responded and those who had not. Then they tested the technology against additional patient data.

“By looking both inside and outside the tumor,” Khorrami said, “we achieved an accuracy of 77% in determining which patients would benefit from chemotherapy—far better (68%) than just looking at the tumor itself.”

Khorrami was the first author of a team of 10 researchers who published the research with Monica Khunger, a Cleveland Clinic physician at the time of the study, now employed by UPMC in Pittsburgh. Their work appeared  in March in the journal Radiology: Artificial Intelligence.

Using radiomics, researchers can extract quantitative, or measurable, data from CT images that can reveal disease characteristics not visible in the images alone, according to a Radiological Society of America’s news release on the research.

“This can change the game, not only for the patient when it comes to outcome, but when it comes to cost overall for the health-care field,” Khorrami said. “It costs about $30,000 or more a year for chemotherapy, so it’s important to know who will respond to chemotherapy, and we’re getting closer to a true biomarker to do that.”