Enhancing the performance of solar power 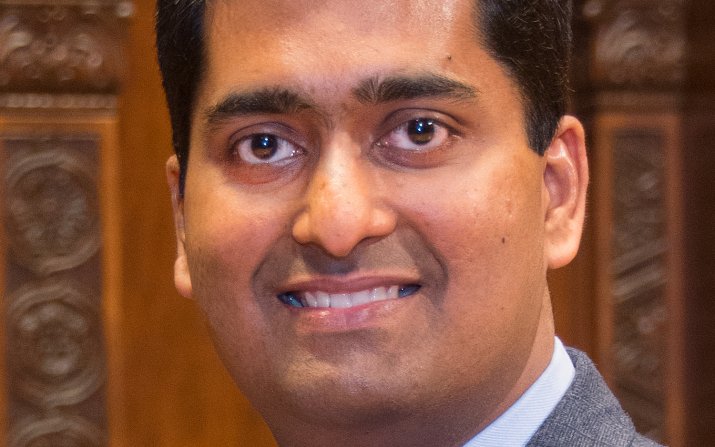 Case Western Reserve University chemical engineer and researcher Rohan Akolkar has been elected as a Senior Member of The National Academy of Inventors (NAI).

Akolkar is the Milton and Tamar Maltz Professor of Energy Innovation and Ohio Eminent Scholar in Advanced Energy Research in the Case School of Engineering.

He is among the 2021 class of 61 NAI senior members representing 36 research universities, government and nonprofit research institutes. Senior members from this class are named inventors on more than 617 issued U.S. patents. He also joins 10 previous NAI honorees from Case Western Reserve.

Senior members at NAI are active faculty, scientists and administrators who have demonstrated “remarkable innovation producing technologies that have brought, or aspire to bring, real impact on the welfare of society,” according to the academy. They are also innovators who have had “growing success in patents, licensing and commercialization.”

Much of Akolkar’s research at Case Western Reserve, and formerly in research and development at Intel Corp., has been in the field of electrochemistry and electrochemical engineering. Over the last two decades, Akolkar has pioneered new nano-materials and their electrochemical fabrication processes, which have enabled production of high-performance microprocessors used in computers, cell phones and other electronics devices.

“Today’s high-end microprocessors have billions of nano-wires called ‘interconnects’ inside them,” Akolkar said. “These wires are really small and have metallic layers that are merely a few nanometers thick. Fabricating them with near-atomic precision is critically needed. Interconnects carry signals, so fabricating them using highly conductive materials is crucial.”

Akolkar’s selection to the NAI recognizes his paradigm-shifting work on introducing new interconnect materials and techniques for their atomically precise fabrication. His work has enabled leading semiconductor industries nationally and internationally to design and manufacture faster and more efficient microprocessors and memory devices. Some of his inventions have already been used in commercial products, and more are on the same path toward industry adoption.

Grant Goodrich, executive director of the Great Lakes Energy Institute, said Akolkar is a tremendous researcher, dedicated to his students and “truly passionate about the possible advances in science and technology that can be unlocked through electrochemistry and electrochemical approaches.”

Goodrich also cited Akolkar’s many collaborations with others in industry, academia, and the U.S. Department of Energy National Labs which have “helped him establish a sterling reputation” throughout the federal department.

Venkataramanan “Ragu” Balakrishnan, the Charles H. Phipps Dean of the Case School of Engineering, said Akolkar’s election was a well-deserved recognition of his career as a researcher and the impact he has made as an innovator.

“His field-leading work in electrochemistry, his leadership at the Great Lakes Energy Institute, and the meaningful partnerships he has established with our national laboratories have helped to cement Case Western Reserve position as a leader in catalyzing breakthroughs in energy and sustainability,” Balakrishnan said.

“What is wonderful is that he has not rested since this amazing work,” Jankowski said. “He remains a tireless researcher, mentor and collaborator across the campus. He and his students are developing next-generation technologies that will have a real impact on society.”

The NAI and CWRU

Following a nomination for NAI Senior Member, individuals undergo a rigorous selection process by the NAI Advisory Committee, composed of elected NAI members and other professionals considered pioneers in their respective fields. Case Western Reserve is an NAI member institution.

“NAI Member Institutions support some of the most elite innovators on the horizon,” said NAI President Paul R. Sanberg. “With the NAI Senior Member award distinction, we are recognizing innovators who are rising stars in their fields and the innovative ecosystems that support their work. This new class is joining a prolific group of academic visionaries already defining tomorrow.”

Other Case Western Reserve faculty elected as fellows or senior members by the NAI in recent years include: